One of the world’s most accomplished historians and provocative commentators on global politics and economics, Niall Ferguson stands at the crossroads of past, present, and future. As the author of sixteen books, Senior Fellow at the Hoover Institution at Stanford University and a senior faculty fellow of the Belfer Center for Science and International Affairs at Harvard, Ferguson has provided audiences worldwide with unparalleled insight and knowledge.

With erudition, eloquence, and humor, Ferguson specializes in putting today’s economic shifts, social changes, and political disruptions into historical perspective, using the past as a roadmap to the future. 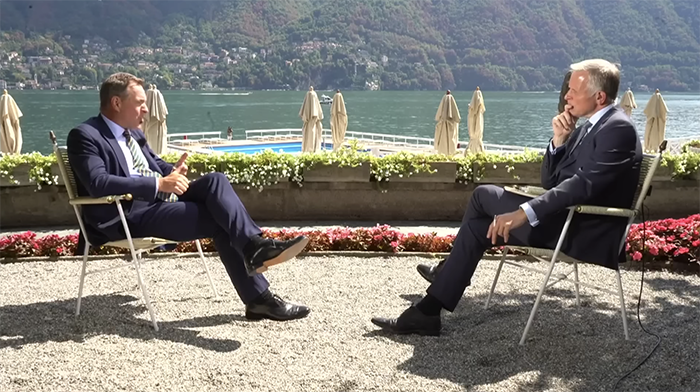 Putin's goal is to prevent Ukraine making a 'success of ...

Niall Ferguson: Donald Trump Not A Fascist But A Populi ...

Niall Ferguson, MA, D.Phil., is the Milbank Family Senior Fellow at the Hoover Institution, Stanford University, and a senior faculty fellow of the Belfer Center for Science and International Affairs at Harvard. He is also a visiting professor at Tsinghua University, Beijing. He is the author of sixteen books, including "The Pity of War," "The House of Rothschild," "Empire," and "Civilization and Kissinger, 1923-1968: The Idealist," which won the Council on Foreign Relations Arthur Ross Prize. He is an award-making filmmaker, too, having won an international Emmy for his PBS series "The Ascent of Money." For the past five years he has written a weekly column for the Sunday Times (London), also published by the Boston Globe and the Neue Zürcher Zeitung, amongst other newspapers. This year he joined Bloomberg Opinion as a columnist. In addition, he is the founder and managing director of Greenmantle LLC, a New York-based advisory firm, a co-founding board member of Ualá, a Latin American financial technology company, and a trustee of the New York Historical Society and the London-based Centre for Policy Studies. His book, "The Square and the Tower," was published in the U.S. in 2018 and was a New York Times bestseller. A three-part television adaptation called "Niall Ferguson’s Networld," aired on PBS in March 2020. His latest book, "Doom: The Politics of Catastrophe," published in May 2021.

The Economic, Social and Political Consequences of the Plague: Putting COVID-19 in Historical Perspective

A pandemic, fires, floods, popular unrest — it’s an intertwined pattern seen throughout history and even in the Bible.

Disasters are inherently hard to predict. Pandemics, like earthquakes, wildfires, financial crises, and wars, are not normally distributed; there is no cycle of history to help us anticipate the next catastrophe. But when disaster strikes, we ought to be better prepared than the Romans were when Vesuvius erupted, or medieval Italians when the Black Death struck. We have science on our side, after all.

Yet in 2020 the responses of many developed countries, including the United States, to a new virus from China were badly bungled. Why? Why did only a few Asian countries learn the right lessons from SARS and MERS? While populist leaders certainly performed poorly in the face of the COVID-19 pandemic, Niall Ferguson argues that more profound pathologies were at work–pathologies already visible in our responses to earlier disasters.

Networks and Hierarchies: Society, Technology and Disruption from the Freemasons to Facebook

Niall Ferguson’s book, The Square and the Tower brilliantly anticipated the crisis that has gripped Silicon Valley since the 2016 election. To understand our modern world, he argues, you need an understanding of both network science and history. The networked age is turning out a lot less well than the techno-optimists foresaw. But why? And is there any way of stopping the trends towards polarization, extreme views and fake news?

The Populist Challenge to Globalization: Brexit, Trump, and Beyond

The political events of 2016 in Britain and the United States came as a shock to many people. But to the historian, this was just the latest of many populist backlashes against globalization. The question is how far populism poses a real threat to democracy, as some have argued. Niall Ferguson argues that, in each case, there was an urgent need for some kind of correction to the trends of the preceding decades, which had led to excessive levels of off-shoring, overseas investment and mass migration. The real question to ask is: What comes next after populism?

"Chimerica": What's Next for the Crucial Relationship Between the People's Republic and the United States?

The most important economic and strategic relationship in the world has, for at least the last ten years, been between the People’s Republic of China and the United States of America: “Chimerica,” as Niall Ferguson called it in 2007. For a time it seemed as if the financial crisis might lead to a divorce between the two, but the relationship survived. Now a protectionist American president and more assertive Chinese president seem to be leading their countries towards some kind of collision on both trade and geopolitics. Can the two avoid sliding into the “Thucydides Trap” of conflict between an incumbent power and a rising power?

The Next Financial Crisis: What Lies Ahead for the Global Financial System?

As the author of The Ascent of Money, Niall Ferguson accurately foresaw the crisis of 2008-9. Ten years on, he asks what the next financial crisis will look like and how near to it we are. With rising interest rates, ever higher mountains of debt and increased risks of a trade war, he argues that trouble is coming soon. How should investors prepare themselves for a crisis that will be very different in nature from the last one? And are there any new opportunities to be found in innovations such as crypto-currency?

Get updates direct to your inbox

Find a speaker that’s right for you.

Want to work for WWSG?